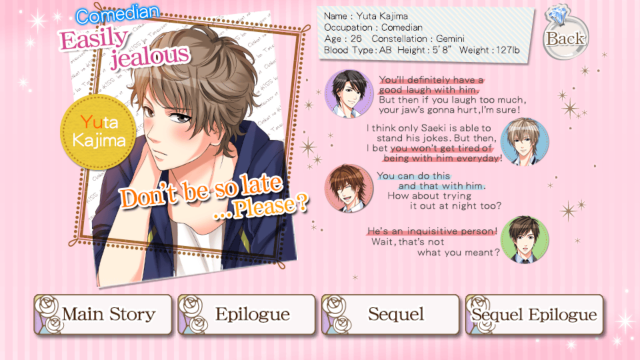 Yuta is the tsukkomi (straight man) in the comedy duo Fukumimi. He’s easy-going and considerate, and puts a lot of efforts into his work due to Fukumimi’s lack of popularity. He’s a caring and supportive person, romantically and platonically; the relationships he has with his friends and family mean a lot to him, especially his friend and fellow comedian, Yuu, the boke (funny man) in Fukumimi.

Yuta seems to be cheerful all the time, but he has his own worries. He has his own reasons as to why he’s so desperate for Fukumimi to make it big within the year, but even after he gets caught in a scandal with the MC, he doesn’t push decisions on to the MC; he lets her make her own decisions, and tries to make her feel at home when they start living together as “husband” and “wife.”

I love how the MC and Yuta support each other in this route. Yuta desperately needs to make it big, but he doesn’t push his dreams onto the MC; he knows that she has to meet the expectations of her parents, so he tries his best not to trouble her. But the MC wants to support him, and she helps him up when he’s feeling discouraged. They communicate with each other well, and everything just seems so natural in their relationship.

When I first played Yuta’s route, I didn’t expect to like him at all. Maybe it was his character design, or because I usually don’t like characters that are overly happy all the time, but his route blew me away when I played it. The pacing and situation seemed the most realistic out of the all the MFW routes that I’ve played, and Yuta himself is so considerate and such a sweetheart that it helped the story seem much more natural that he and the MC would fall in love. I wanted to replay Yuta’s season 1 routes before his season 2 main story came out, and I’m so glad that I did. Happy playing!