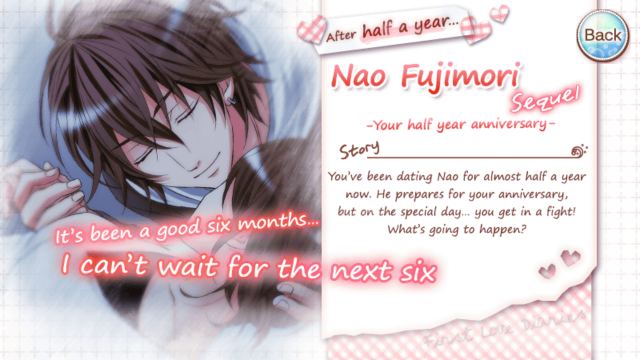 Nao and the MC’s six month anniversary is coming up, and after hearing the MC gush about her friend Saori’s anniversary date with her boyfriend, Nao feels a bit stressed about date ideas for their own anniversary. He wants to make it special and original since she’s his first girlfriend and it’s an important even for them as a couple. After seeing how much Nao is struggling over it, the MC suggests that they come up with an idea together as a couple, since its an anniversary for both of them.

Nao is a high school boy, so it’s to be expected that his libido is a bit much, but the MC feels a bit insecure because it seems like all he wants to do is have sex instead of other things, like planning out their anniversary date together. I could really relate to the MC’s feelings in this route; I really enjoyed Nao’s main story route, but the Nice route had have second thoughts about him. Of course towards the end it turned out that it was just misunderstandings and miscommunication between them. Once again, I have to mention how much I love Nao and the MC’s friends; they definitely made the Nice route ending a lot better.

I just got plain mad at Nao in the beginning of the Naughty route. The ending was cute and a better than the start of the route, and I’m glad that Nao realized that he was in the wrong, but I wish that he didn’t have to make such a mistake in the first place. I would only recommend the Naughty route if you really like Nao. Happy playing!