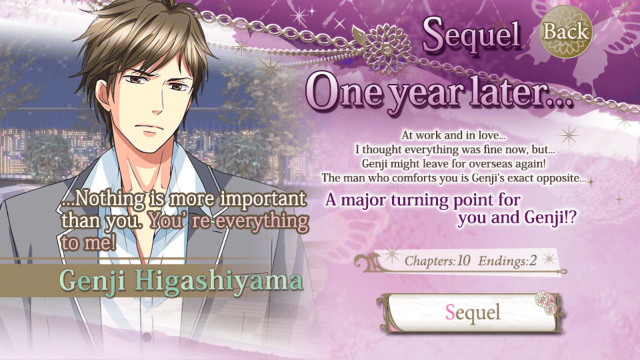 It’s been a year since the MC and Genji have started dating again, and things are going well for both of them in their careers and romance. Genji gets chosen to go to Italy for the World Cup, and with his growing popularity as Japan’s “Guardian Angel,” the MC starts to wonder if they’ll get separated again.

Genji starts coming out commercials and talk shows, and starts being associated with the popular actress Mizuki Nakagawa. A magazine prints out a story about the two having a midnight rendezvous, and the MC starts to have doubts after remembering that Mizuki called Genji late at night when he stayed over at her house. He reassures her that there’s nothing going on between them, and tells her news: he’s going to be transferred to AC Milan, the Italian team he dreamed of being part of. He asks the MC to come with him, but she can’t answer right away due to her work.

The MC struggles with being the project leader of the collaborative showroom she’s been put in charge of. She feels as if Yuki Kazuhito, who’s in charge of the advertisement for the project, is constantly bailing her out of trouble with the team members. After going out for a drink together, he confesses to her, only to be caught by Genji. Genji and the MC get into a fight, both accusing the other of caring about their careers more than the other.

Genji decides to turn down the transfer offer. He insists that it’s his own decision, but the MC feels as if it’s her fault that he gave it up. Her suspicions are confirmed when the coach of AC Milan, Giuseppe, comes to Japan and asks her to convince Genji to at least hear him out one more time. He says that Genji told him that he gave up the girl he loved for soccer in high school, and if given another chance, he would choose the girl.

There’s a lot of growth in this route, both romantically and personally. A lot of times, people will see things as either black or white, and the MC was no exception: she wanted to be with Genji, but she didn’t want to give up her job or be separated with him. She kept seeing things the way they were in high school, and it isn’t until Genji tells her that things are different now and that they can choose both that she comes to the realization that they can keep both of their careers and their relationship. It’s something important that a lot of people don’t seem to realize, and I liked how Voltage used it as a theme.

While I did enjoy this route, there wasn’t anything special about it. There are a few other Voltage routes with situations like these, and I think some of the other ones did it better. If you enjoyed Genji’s main story, then I would recommend this route. Happy playing!