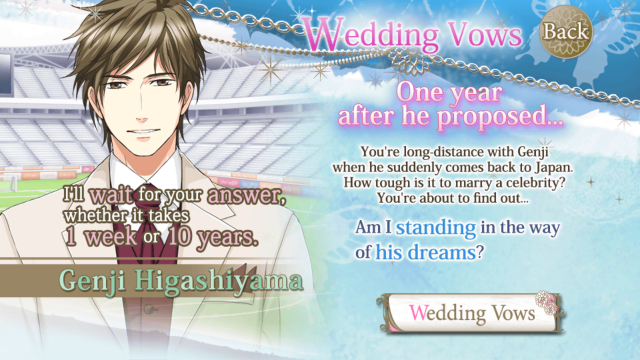 It’s been a year since Genji proposed to the MC, and both of them are pursuing their careers while keeping a long distance relationship. The MC gets promoted as a team leader at her work, and Genji gets put into the national team for the world championship and returns to Japan.

Genji tells the MC that he’s been offered a leadership position by the AB Milan coach, and that he might take him up on it and return to Japan so that they can finally get married. The MC is happy that he’s thinking of her, but doesn’t answer right away; with Genji’s promising career as a soccer player and with her new promotion, things would be hectic if they decided to get married at that moment. Genji and the MC visit her parents’ house, and while they’re there, conversation turns to the MC’s promotion. After talking about the MC’s work with her parents, her parents are happy to see that their daughter is in good hands with Genji.

Afterwards, they go to visit their old high school, and Genji tells the MC how he’s always wanted to a leader (coach) since back then. The MC tells him that she’ll support him, but still can’t find it in herself to bring up their marriage. A few days later, Genji leads the win in the Japan-America game, and in an interview afterwards, says that he’s interested in retiring as a player to become a coach, as well as getting married to the MC. The MC starts getting harassed with phone calls at work, and the calls from a private number that she’s been getting start to happen more frequently.

The MC’s parents are worried about the media coverage she’s been getting, and convince her to come to their house for a while. After hearing how worried her parents are, Genji asks if his dream of being a coach is hurting her and her parents. He visits their house, only to have the MC’s father tell him that he doesn’t trust him with his daughter anymore. The MC calls Genji, and he says that he’ll give up on his dream if it’s going to hurt her, but the MC says that she’ll support him no matter what his dream is. Later on he meets up with the MC and tells her that he’ll continue to play in Japan while going to a coaching school at the same time. After winning the final game, he expresses his gratitude and apologies to his fans, family, and the MC and her family. The MC’s father gives his approval again, and the two get married afterwards.

Genji grew on me a lot in this route. You can tell that he’s matured, both romantically and professionally. He’s a lot more caring in this route, and does his best so that the MC and her family don’t suffer from his dreams, which is something that you wouldn’t have seen in his main story; back then, he probably would have said something about how their relationship only concerns the two of them. His growth makes him a much better character in this route, and it makes such a difference in the relationship he has with the MC.

There were a lot of other things that I loved in this route as well. The MC’s parents are worried for her, especially her father since he’s the one who arranged the marriage between her and Koichi. He honestly wants the best for her, just like Genji, and the two consequently butt heads because of that. Aiba is amazing in this route; he’s there for the MC, not just as a work colleague but also as a friend that she can talk to. It made me want his wedding vows sequel, even though it’ll probably be a while until it comes out *cries* I also loved how the MC met Genji’s parents in the end. Personally, I would have loved to see more of them, since marriage also involves the families of the two getting married.