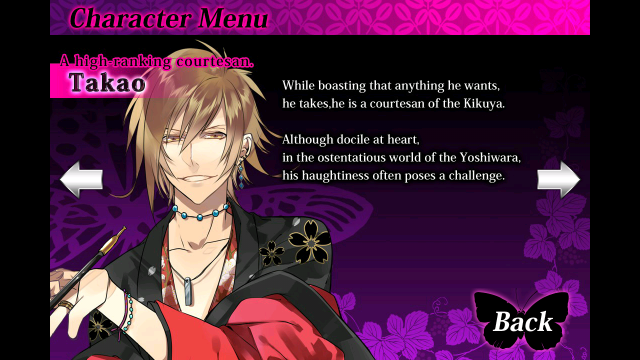 After being mistaken as a rich trader’s daughter, the MC is given a choice to spend time with one of the courtesans of the pleasure district. She chooses to spend time with Takao, the most popular courtesan of Kikuya. They start to fall in love, and long for a relationship as a man and woman, not as a courtesan and customer.

This was the first D3 game I’ve played, and I wasn’t sure what to expect. While the route was dramatic, I think it could have been written better. The focus is more on the romance, but it was a bit fast-paced. One thing that disappointed me was the lack of character development. The game reminded me of Enchanted in the Moonlight, where the men are after the MC’s powers, or in this case, money. There were a lot of romantic scenes, and they certainly made me blush; I actually had to stop a few times from second hand embarrassment.

Like I said earlier, the plot is really heavy on the romance. Their relationship starts as a courtesan and customer, but it develops into a relationship between a man and woman rather quickly, especially on the MC’s part. The MC was extremely innocent, and that might have contributed to her falling for Takao so easily. There was a plot element towards the end of the route that I didn’t really care for, mostly because I think they could have made a better hurdle for the two to overcome; it kind of felt like Takao’s route was handed this plot element because they thought that he would be one of the more popular characters and didn’t really want to try writing a better opportunity for character development.

Takao himself is an interesting character. He’s childish and playful at times, but there are moments where he’ll suddenly become serious. While he is the most popular courtesan in Yoshiwara, I wasn’t sure if he wanted to be one or not. He has a reason he needs the money a courtesan makes, but I wish they had went more in depth about whether Takao himself was happy with being one or not. The only time I saw his feelings towards his profession was only after he fell in love with the MC, and in that situation no man would be happy with it. He’s surprisingly possessive about the MC, and dislikes it whenever she talks to other men. I really liked his character, and was disappointed that the sequel and date scenario routes were so short ㅠ____ㅠ

While I was expecting steamy scenes based on my friend’s reaction to the Forbidden Romance series, I was surprised by how descriptive they were. I definitely do not recommend this game to anyone who feels uncomfortable with descriptive intimate situations, but if it’s something you’re comfortable with, then you should give it a try. Happy playing!

2 thoughts on “[REVIEW] The Men of Yoshiwara: Takao Main Volume”