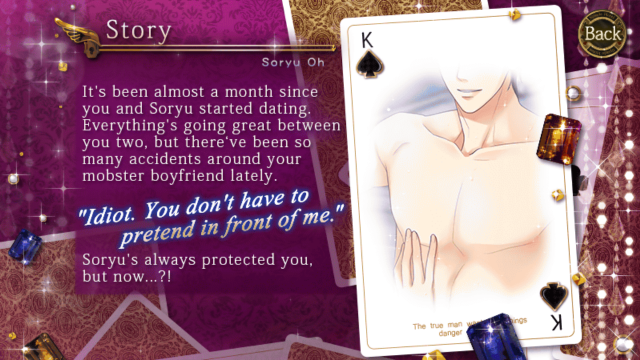 It’s been a month since Soryu and the MC have started dating, but constantly run into trouble when their dates continue to get interrupted by Inui or other mobsters who have something against Soryu. Things turn serious when mysterious people start to target Soryu, and he starts to suspect that it’s someone close to him within the Ice Dragons. The MC is worried about Soryu, but he suddenly tells her that he’s breaking up with her.

Soryu is much more open in this route (until he decides to break up with you). The MC doesn’t like how he keeps secrets from her, and wants him to tell her more about himself and what goes on in his life. While I do believe that open communication is important in a relationship, we also have to take into consideration that Soryu is part of the mafia. I’m not saying that he shouldn’t tell her anything, the things that he neglects to tell the MC is done so for her protection.

One thing that caught my attention in the route when Soryu tells the MC that she’s always so earnest. She’s always honest, and that contrasts a lot with Soryu, who generally doesn’t say what he’s thinking about. It makes it hard for them to understand each other, but they come to an understanding by the end. I’m glad that the MC understood why Soryu doesn’t tell her everything at the end, and think that they actually grow closer and trust each other more because of it. Communication is important in relationships, but so is mutual trust.

Being part of a mafia family, I wasn’t expecting Soryu’s family background to be all sunshine and rainbows, but it surprised me how bad it was. Usually his background is used for flirtatious and womanizer characters, but it’s interesting to see how different Soryu is from other characters with the same past. It didn’t really affect the story in any way, but just a side note that crossed my mind.

I loved Sakiko and Chisato in this route. I think they’re one of the more underrated of the Voltage MCs’ friends, but in this route they show genuine concern about the fact the MC is dating a mafia boss. This route goes more into depth about what it really means for the MC to date someone in the mafia, and while the route does romanticize it, they’re dangerous situations that the MC probably could have gotten injured from, or even killed.

I recommend this route to those of you who love Soryu, and if you haven’t given him a try, please do so! He’ll quietly creep into your heart >w< Happy playing!