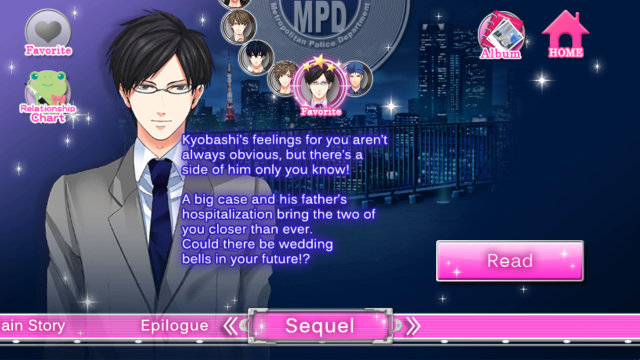 After Kyobashi’s father, the chief of police, collapses and is taken to the hospital, the MC and Kyobashi are stationed there to investigate on a medical malpractice case from three years ago. The MC is shocked by how cold the relationship between Kyobashi and his father is, and wants him to open up to her more so she can get a better understanding of him.

I was interested in the relationship between Kyobashi and his father in the main route, and I’m glad that Voltage went into it further in his sequel. It turned out to just be a misunderstanding between the two, but it showed Kyobashi’s motives for becoming a detective. I found the father-son pair adorable because they’re exactly like each other XD What I loved the most in the route was the constant bickering between Kyobashi and the MC. It kept me laughing throughout the entire route and made me love him and the MC even more >w<

Kyobashi and the MC both want the same thing in this route: they both want the other to open up and rely on them more. While the MC is worried about his relationship with his father, Kyobashi is worried about what the MC thinks of his past experiences with women. I actually enjoyed the normal ending more in this case, mostly because they address the latter more and talk about what kind of family they’ll have (/w\) While the happy ending gives you the proposal, the normal ending has more heart-to-heart talk (IMO), and that may be the main reason why I liked it more.