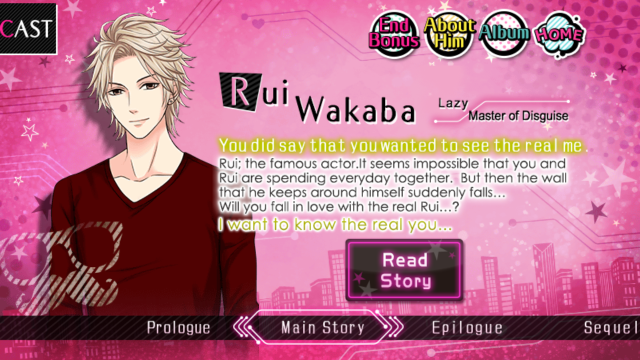 After MC chooses to room with Rui, a popular actor, Rui’s manager comes in and requests that they find a man who claims that he can introduce girls to Rui if they sleep with him. Rui is put in charge of the case, and asks the MC if she would join his fan club under cover for more information. As she works on the case with him, the MC catches glimpses of a different side of Rui, and starts wondering which one is the “real” him.

What’s interesting about Rui is that unlike all the other celebrity characters in the Voltage fandom, Rui has been one since he was a child. He’s been in the show biz for over twenty years, and this plays a big part on his personality and how he interacts with others. He’s been surrounded by cameras all his life, and consequently acts like he’s always in front of one; he smiles and acts agreeably, showing others the idealized “actor” version of him while suppressing his “real” self without even knowing it.

The MC is fooled at first, but she eventually starts noticing the little moments where Rui is different than usual. When she tries to talk to him about it, he calls her “annoying” and changes the subject, and starts changing his attitude towards her as well. The MC frustrated me at times with her attitude towards wanting to have Rui show his “true” self. She’s apprehensive about the fact that he’s cold to her and wants him to be nice to her, but when he’s nice she says that he’s not “really” being nice. She felt a bit wishy-washy to me, and I wish Voltage had given a bit more thought to her characterization in this route.

The pacing in this route was a lot better compared to Kiyoharu and Sakuya’s routes, and the plot itself was pretty solid and probably the best one so far. However, I think the relationship development was a bit lacking and could have used a lot more work. While the case in this route was well written, it fell short for me at the end when the antagonist was revealed. The antagonist’s reason for doing the crime felt a bit forced and seemed like something Voltage just came up with because they couldn’t think of anything else.

Rui did admit that he had a side of himself that he didn’t want to acknowledge, but even when he does start to open up to the MC, I didn’t see much difference in his personality, other than him being a little more honest about what he wants and a bit more shy, which is interesting since he appeared so cold when the MC caught only glimpses of his “true” self. I did like him as a character, and can’t wait for his character development as well as how his relationship with the MC will grow in future routes.

The end set wasn’t anything special, so I wouldn’t recommend you get it unless you absolutely love Rui and want more. I hesitate to recommend this route if you’ve been feeling iffy about the releases for TLSL so far, since I’m starting to get a better feel for the game now. I can see why people might not like this game compared to older Voltage releases. However, if you love the feel for TLSL so far, then I would recommend this route if you like characters like Rui (the sweet trap end is just adorable >w<). Happy playing!