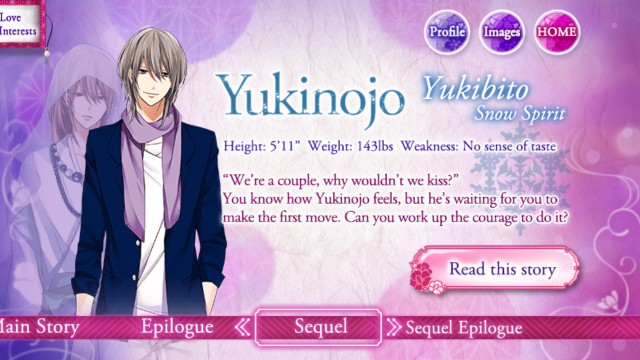 It’s been a month since the MC and Yukinojo have been together, and things are going well for them when they’re suddenly summoned back to the mononoke village. After remembering the chilly welcome she got last time from the yukibito when she visited, the MC is worried about how she’s going to be received this time. However, both she and Yukinojo are surprised when she’s welcomed with open arms.

The lack of physical touch between the MC and Yukinojo plays an important part in this route. Unlike all the other EITM routes, Yukinojo’s main story didn’t have as many physically intimate scenes, but it slowly starts to change throughout this route. It’s actually the main source of conflict in the route, and while I thought that it was interesting (in a good way) that Voltage decided to do this, I actually enjoyed the plot of this route a lot more than I was expecting to.

I think the best way to describe the relationship between the MC and Yukinojo is “warm,” compared to the “hot” found in all the other EITM characters. He’s much more cautious about closing the physical distance between them, but you can still see how much he treasures the MC in the little gestures that he does, from the little kisses to softly touching her cheek >///< He respects her space and doesn’t want to do anything that she isn’t prepared for, even if he himself wants to deepen their relationship. He’s opened up to her a lot more since the end of the main story, and it was endearing to watch the MC and Yukinojo act all cute together while the other ayakashi make fun of them >w<

They also bring up the time difference between humans and ayakashi in this route. If you’ve played Yukinojo’s main story, then you know why the yukibito are so cautious of humans, especially when it concerns their clan leader. I’m interested in what Voltage is going to with the time difference, if they do ever address the problem at all. I had thought about it in previous EITM routes, and I’m curious if it’s something that can even be addressed. I have a feeling that they’re just going to act like it’s not a problem though… Voltage also brings up the differences in the way ayakashi and humans think in this route, but that seems to be a common theme throughout the game in general.

I enjoyed this route a lot, especially after Yukinojo’s main story. Yukinojo’s routes are different compared to the other characters in EITM, and I’m glad that they changed it up. This route really shows how far the MC and Yukinojo have come in their relationship so far, and I highly recommend it, especially if you loved Yukinojo in his main story. If you were feeling iffy about him, I would still give this route a try before you decide whether or not to play his future releases. Happy playing! >w<