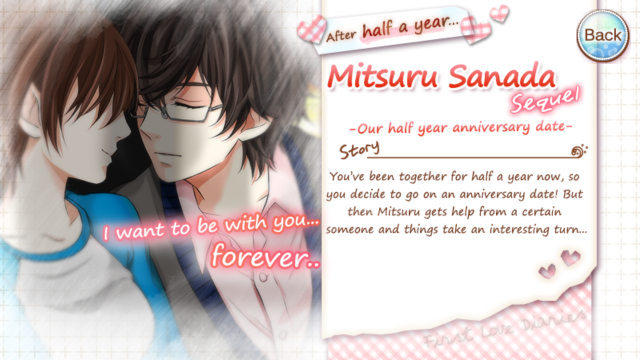 Mitsuru and the MC have been dating for six months, but Mitsuru doesn’t seem to understand why they have to celebrate it when it’s not a “real” anniversary. After they reconcile and decide to go on a date, Maki suggests to the MC that they ask Takumi for advice on what to do to make it a “special” one. After following his instructions, both the MC and Mitsuru feels as if there’s something off during their date, and make plans to redo it on their own terms to make it special for themselves.

Even though Mitsuru and the MC have been going out for half a year, they still have their misunderstandings. They have a better understanding of each other, and can usually anticipate how the other will act, but that doesn’t stop them from arguing time to time. However, I think that they get closer to each other with each argument, because afterwards they both make an effort to understand the other’s perspective on things and realize how much they treasure one another.

I personally liked the Best day ever route a lot more than the Remember when… one. The date in this route shows the effort they make in trying to understand the other, even when they argue. The end of the this route gets serious, and brings up a lot of good points about the decisions that Mitsuru and the MC make in their relationship. While I’m not saying that it was right of Mitsuru’s father to do what he did, I think it served as a good wake up call to both the MC and Mitsuru about their relationship and how it can affect them and their dreams. The ending of that route also seemed more meaningful to me than the Remember when… route. They gain a better appreciation for how long they’ve been together and what they’ve been through (IMO). Not to say that the other route’s ending wasn’t adorable >w<

This sequel showed a lot more growth between the MC and her love interest compared to the other FLD sequels. I can’t wait to see how their relationship will develop in season 2, especially since Mitsuru and the MC are so comfortable with each other. I definitely recommend this route if you loved Mitsuru in his main story, and if you didn’t give him a try, I highly encourage you to do so! Happy playing! >w<