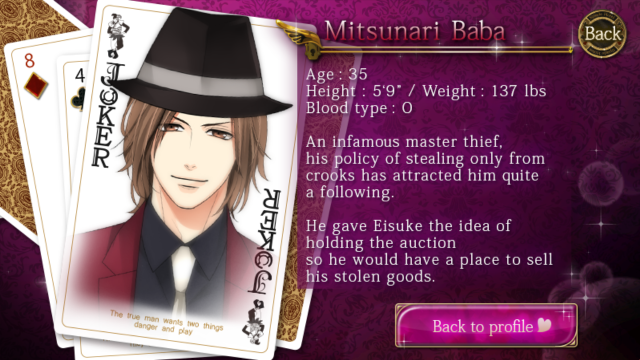 The MC is surprised by the other bidders’ reactions after she chooses to go with Baba. However, she quickly learns that the easygoing and carefree exterior that she had mistaken for kindness is actually a symptom of his womanizing tendencies. As the MC spends more time with him by helping him out for an upcoming theft he’s planning, she realizes that there’s more to him than the laughter and teasing he shows to her and everyone else, and slowly starts to fall in love despite his warnings not to.

Baba makes a lot of appearances in other routes, and they only add to his mystery that surrounds him. His womanizing tendencies are a running joke within the game, and it is amusing to see how far he’ll go for a woman or the things he’ll say to the MC in his attempts to woo her. The only reason why we even know he’s a thief in the other routes is because of what the other bidders say about him and his name, which references Ali Baba. This route does a get bit deeper as to why he chose such an interesting career path, but not until the end.

Baba is a complex character and hard to describe; I don’t think you can fully understand his character without playing his route firsthand (IMO). It’s easy to say that he’s hiding his true intentions under his easygoing exterior, or that he’s genuinely like that; personally, I think it’s a mix of both. There’s more to Baba than meets the eye, but the side that he shows to others is his true self as well, to an extent. He’s like both sides of a one-way mirror; on one side, what you see is what you get, but on the other, there’s more on the other side. I don’t know what Baba was like originally, but I think he got used to hiding behind smiles that it’s who he really is at this point; there are some thoughts that he’ll keep to himself, but the rest is out for the world (or the ladies lol) to see. I think his career as a thief and his motives for being one fit his character extremely well; it built on his character, and just clicked with the image I had of him.

The romance between Baba and the MC was well written. The situation that brings them closer is a bit questionable, but it happens gradually, and you can see the MC slowly get a better understanding of who Baba is and falling for him at the same time. She goes from being unable to take anything he says seriously to being able to discern what Baba’s true intentions behind his words and actions. Like all KBTBB routes, it was a bit dramatic, but it didn’t get to the point it felt unnecessary and the plot flowed well and was well paced. I liked how strong the MC was in this route, and appreciated the moments of weakness she had as well; falling in love with someone is never easy, especially with a person like Baba, and I think Voltage captured it well.

If you liked the other KBTBB routes, then you’ll definitely enjoy this route. I think Baba is underappreciated in the Voltage fandom; usually the “nice guys” in Voltage games have this problem, and Baba falls to it as well *sighs* I highly recommend this route, and hope you give him the love he deserves! Happy playing!