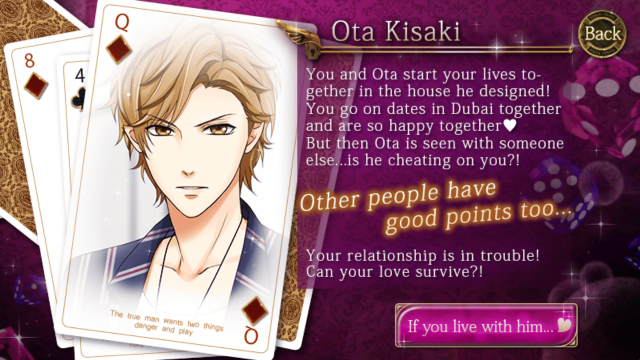 After moving into a house in Dubai designed by Ota for the two of them, the MC is surprised to find out that Ota has been offered a job to help design the International Athletics Meet there. He accepts, and starts working with Amina, a designer from the U.S. who worked in Hollywood. Everything seems to be going fine until the MC is accused of poisoning the sheik, but once she gets proven innocent, she discovers that Ota has been two-timing her while working on his new project.

A lot happens in this route, and I don’t think I can fully explain my opinions on it without giving major spoilers on it. Warning for those who don’t like big spoilers that there will be some from here on in this review.

Voltage lets on in the purchase screen that Ota is cheating, and since Amina is the only female character that’s introduced, it becomes obvious pretty early in the route that she’s the one that’ll become Ota’s other woman. While I was expecting him to be manipulated into doing it since he’s obviously going to end up with the MC in the end (since the purpose of these games is to end up with her lol), I was and wasn’t surprised that Ota would go that far for the MC to keep her safe. I wasn’t surprised that he would since he was willing to give up doing the auctions in his sequel just because the MC didn’t want him to participate anymore; he clearly values and loves the MC a lot. However, I thought he would put more of a fight to find a way to stay with her since his routes focus a lot on loyalty.

He does come to his senses when the MC talks to him about it, and they try to come up with a solution for the threats she’s been receiving together, which was something I liked. Ota tends to do things on his own since he’s used to doing so as an artist, but when it comes to the MC he tries to work with her and understand her perspective on things. I loved the MC in this route. She has a lot to feel insecure about, since Ota is well known and loved as the “Angelic Artist” and because their relationship started from a pet-master situation. However, she tries really hard to make their relationship work out, and doesn’t give up on herself or Ota. She feels jealous that Ota has things he can talk to Amina as an artist that he can’t with her, but she still makes an effort to be nice to her and make her feel welcome. She initially feels shocked and hurt when she sees Ota with Amina and his sudden attitude change towards her, but she makes an effort to talk it out with him, and that’s what ultimately saves their relationship. She doesn’t give up Ota’s work even when he acts like it’s nothing to him, and does her best to support him in every way.

I think Voltage could have written Amina a bit better, but she did her job in this route. Personally, I suspected her the moment Ota explained why he “cheated” on the MC with her, and I think Voltage could’ve tried a little more to make it less obvious that she was behind all of it. While I was angry towards Ota in the first half of the route due to the whole “cheating” situation, I liked him a lot in the second half. If you liked Ota in his season 1 routes, then I would recommend this route. He’s still a tease, but does his best for the MC in his own way, and will do anything to protect her. Happy playing!

9 thoughts on “[REVIEW] Kissed by the Baddest Bidder: Ota Kisaki season 2 Living Together”