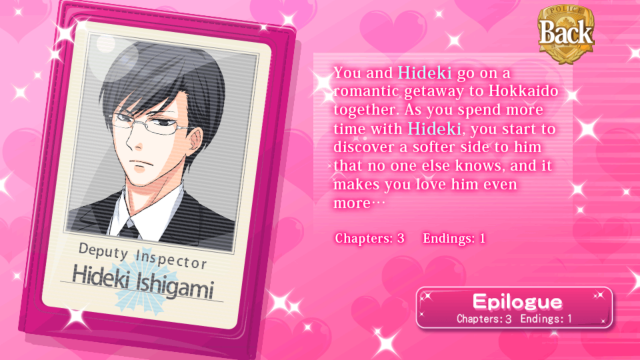 While the MC is in Shanghai for another diplomatic visit, Ishigami happens to be there at the same time for his job. While their romance blooms in the streets of Shanghai, the MC learns more of Ishigami’s past when she meets his childhood friend Yusuke. Things turn complicated when Yusuke and Ishigami are under suspect for suspicious dealings in the dark, when suddenly Ishigami is put under arrest?!

Ishigami has opened up a lot to the MC since his main story. He’s much more affectionate, from the texts that he sends her to researching the best place to buy her favorite sweets (/w\) You get to see a different side of Ishigami with the introduction of his childhood friend Yusuke; it was nice to see a side of Ishigami that was more carefree and casual. You learn a lot about Ishigami’s past through Yusuke, and I loved seeing that Ishigami has a close friend that he can rely on, especially since his reputation is that of someone who doesn’t get close to people.

Trust is a big theme in this route, and it pertains to more than between Ishigami and the MC. Yusuke is an ex-diplomat who lost his job from a scandal, but despite that, Ishigami chooses to trust him. The MC in turn chooses to trust Yusuke because Ishigami trusts him, and throughout the route you learn that Yusuke isn’t as bad as everyone makes him out to be. The trust that the MC puts in Ishigami shows the strength of their relationship, considering his career; as a member of the PSD, he often goes without contact for long periods of time, and there are a lot of things that he has to keep secret from the MC due to confidentiality. However, despite all his secrets and the fact that he could be keeping more from the MC than he lets on, she chooses to trust him.

The trust that Ishigami places on the MC is amazing as well; his opinion of her has changed a lot from the pampered prime minister’s daughter he thought she was. In this route you see that although it might place the MC in danger, he trusts that the MC is the only one who can go through with a certain operation, and I loved how he did that. It showed that he’s broken down his walls, and isn’t scared of losing people precious to him anymore.

I loved this route a lot more than Ishigami’s main story. You get to see more of what it means to be dating a member of the PSD, and the MC and Ishigami’s relationship develops a lot through the trust that they learn to put in each other. If you were hesitant to give this route a try after his main story, I recommend that you do. The overall plot was written better, and there’s a lot more romance and cute moments between the two >w< Happy playing!