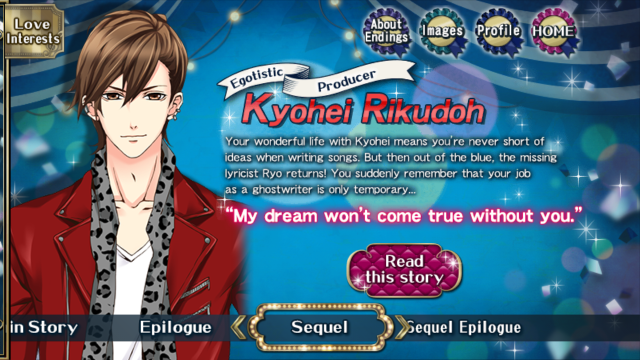 It’s been six months since the MC has become Revance’s “ghostwriter,” and after a successful promotion of singles for the band’s 10th anniversary, Kyohei gets invited to a dinner with a record label exec in New York! With Revance’s future is bubbling with possibilities, the MC finds herself questioning her abilities to write lyrics for them; although she enjoys writing lyrics for Revance as their ghostwriter, she finds herself wanting to chase after her original dream of writing screenplays.

I really liked Kyohei in this route. He has high expectations of the MC, but honestly believes that she has the abilities to meet them and encourages her whenever she starts to lack confidence in herself. Even though he encourages her, he’s honest; he’ll criticize her work when it doesn’t reflect her own style and skills that draws people to her work, but he’ll also give her advice to guide het her back on her feet and start again. Occasionally he’d drop a line that made my heart flutter (ex: “I love singing the words you write” >w<), and while he does his best to support the MC in this route, towards the second half of the story I didn’t agree with his view on their situation.

The MC isn’t the type to let criticism get to her; she’s always looking for ways she can improve, which is something Kyohei loves about her. This route focuses more on the MC’s development instead of Kyohei’s; she’s stuck in between her own dreams and Revance’s success, and while she wants to go after both, she can’t. I liked how Voltage portrayed her inner thoughts in this route; I could relate to her a lot personally (choosing between two things you really want).

While the plot in this route does address issues that needed answers (MC’s position in Revance, and her future career choice), I think Voltage could have written it a bit more elegantly. Maybe my expectations were too high after reading Kyohei’s main story, but this route fell a bit short from what I was expecting. The pacing dragged a bit in the middle, and felt really rushed at the end; I think Voltage spent too much time on making Kyohei’s thoughts show behind his actions. Kyohei’s reasoning towards the end was too sudden and didn’t make sense to me as well, especially since he takes back the decision he made for them in the endings; there was literally only one chapter in between these two events, and it ruined the pacing for me.

While I did enjoy the sequel, I think it could have had more improvement. If you liked Kyohei’s main story, then you’ll probably enjoy this route as well; if you didn’t like his character, then I wouldn’t bother getting this route. I would only recommend the end set if you wanted more action between the MC and Kyohei, since it seemed a bit lacking in this route. Happy playing!