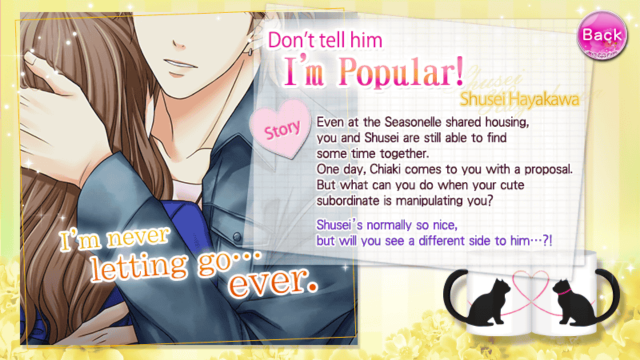 After moving into the newly built company condo, the MC is saved from a dangerous fall by none other than Chiaki. Shusei and the MC start to worry that their relationship has been discovered by the youngest member of the team, and their suspicions are confirmed when Chiaki starts to make moves on the MC, saying that she’ll turn from Shusei since “all women are the same.” The MC tries to keep it from Shusei because she doesn’t want to worry him, but then Chiaki’s moves start to get bolder?!

*whispers* This route was really painful for me because I love both Shusei and Chiaki to pieces and asking me to choose between them was just torture. They basically played tug of war with my heart the entire route ; w ;

Shusei is a gentleman, and his thoughtfulness and the affection he showers the MC with is just so heartwarming it makes me want to melt into a puddle of goo =w= He’s a bit more aggressive when it comes to the intimate scenes in this route, but that’s probably because he’s frustrated since they can’t get time to themselves in the condo XD

I’ve gone into how much I love the MC and Shusei’s relationship before, and I’ll say it again: the amount of trust and support they have for each other is absolutely amazing. However, in this route, they face the same problem again. They don’t want to worry each other, so they keep their thoughts and worries from each other, and while it doesn’t pull them apart, it causes problems for themselves when those problems easily could’ve been overcome by them consulting in each other and facing them together. They learn again that they need to lean on each other more, and I’m hoping that this doesn’t happen again in Shusei’s season 3 routes; I really want to see how their relationship steps forward (if it can. Their relationship right now is almost perfect imo).

This route put a surprising amount of concentration to the other man in the love triangle. Chiaki is manipulative as ever, and it hurt to see how he was before he got into a relationship with the MC (except I guess he didn’t really in this route since she’s going out with Shusei ; A ; ). One thing I liked was how both the MC and Shusei didn’t want to break the relationship they already had with him, and tried hard to keep it that way; he’s important to both of them as a colleague, and both of them see him as a little brother because he’s the youngest member of Seasonelle. It also says a lot about their characters, especially since he does some questionable things in this route towards the end; however, he learns from his mistakes in this story, and the MC and Shusei’s attitude towards his actions definitely plays a big part in it.

I highly recommend that you play this route! And if you haven’t played any of Shusei’s stories, you definitely should. He swept me away again in this route (even though Chiaki made things painful for me; he dropped this question at the end and it hurt a lot ; w ; ), and after playing the sequel epilogue, I’m really hoping that they’ll show the MC at least pregnant in season 3. He’s so excited to be a dad, and I know he’ll be a great one >w< Happy playing!