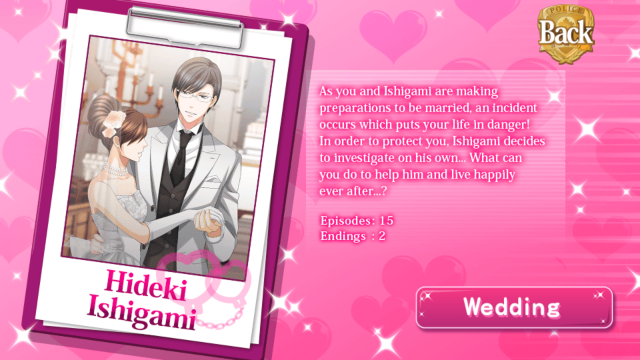 Half a year after her graduation, the MC is in London pursuing her dream of acting professionally on stage. After landing her biggest role yet, things are going well when her father is suddenly reelected into office again. Hired men start going after her, and she finds herself under the protection of Subaru’s new team. Ishigami comes to London to investigate things on behalf of Public Safety, but concerned with her safety, he keeps contact with her sparse as her worry for him grows.

WOW. Let me just say that this is the most impressed I’ve been with a MSB route in a long time. There’s so much development in Ishigami’s character and his relationship with the MC, and personally I think it was done with a well-written plot, which isn’t always a guarantee for this game.

Ishigami is used to being alone. He’s known as a “cyborg” within Public Safety, and after his sequel we learned that even in his past he had very few people he considered close to him. His view on family and friends is narrow and underdeveloped, and because of this, he doesn’t know how to deal with the changing relationships he’s building with the people around after he met the MC. He’s had few things that he considered important enough to protect in his life, and now he has people he wants to protect, but isn’t sure of how to do it. So he goes and deals with it the only way he’s done it in the past: shouldering all the responsibility and trying resolve things by himself.

I absolutely loved the MC in this route. She wants to protect Ishigami as much as he wants to protect her, and really wants him to understand that. Ishigami’s tendency to face things alone would have caused issues with their relationship sooner or later, and her persistence and refusal to give up on seeing him and contacting him slowly gets him to understand that she cares for him as much as he cares for her. Subaru was an absolute gem in this route; he’s surprisingly insightful about Ishigami’s personality, and pushes the MC in the right way when she’s feeling lost multiple times in the story.

One thing that I noticed is that all the characters have noticed how Ishigami has changed since before he met the MC. It’s not only Subaru who says it; the rest of the bodyguards have noticed as well, and they know that it has to do with the MC. This is important because while at first glance he doesn’t seem that different, it’s only because we’ve seen Ishigami in love or falling in love with the MC. Their pointing this out to her helps her realize what influence she has in his life, and Subaru helps her realize that she’s the only one who can break Ishigami free from his belief that he has to handle everything alone. She refuses to be to the only one safe when he’s in danger, and like I said earlier, her persistence is what eventually breaks down his walls and gets him to start accepting help from the very people he wants to protect; Ishigami finally learns how to share painful moments and trust others with his feelings.

I definitely recommend this route! Though interactions between the MC and Ishigami are few in the beginning, I didn’t mind as much because the plot was well written and paced perfectly. The MC’s thoughts and feelings also kept me engaged throughout the story, and she grows a lot as a character too. This route really made me appreciate Ishigami, and he’s definitely my favorite in MSB (for now… lol). Happy playing!