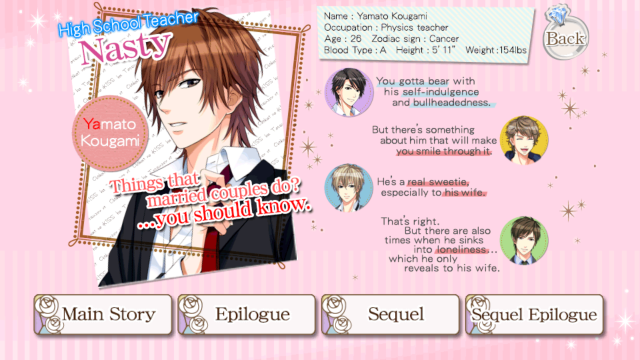 It’s been almost a year since Yamato and the MC started living together, and things are getting busy for him since he’s been put in charge of the graduating class. The MC is has her hands full doing her best at trying to support him at both work and home, but the peace in their personal life is shattered when one of his students runs away from home. Watching the student’s situation as they help her out, the MC finds herself wondering about her current relationship with Yamato, and their future together.

Yamato has changed a lot since the beginning of his main story. This route goes more into Yamato’s views on family and how his relationship with his father influenced how he views relationships with other people in general. He’s gotten closer to his father little by little, and you can see it how it’s affecting his relationships with others. While he used to be a loner “alpha male”, he’s now relies on the MC more and has opened up to the rest of the LI gang.

However, he’s still not completely sure of how to deal with these changes; a year has passed since he met the MC and started to reach out to people, but it’s hard for him to completely understand family and relationships with other people, especially when it comes to communication. He can’t understand why people can’t be more honest and understanding of each other, but the main conflict in this route and his attempt to resolve with the MC helps him learn; you can see this when he confronts his student’s mother, saying that he doesn’t want her to lose a place to go back to. Communication and misunderstandings are a big theme in this route, and it fully explores and develops Yamato’s lack of experience in the former.

I absolutely loved the relationship that Yamato and the MC have. They’ve gotten closer, and act affectionate and in sync in front of others without even realizing it XD Their teasing is as cute as it was in the main story >w< This route focuses more on what path their relationship is going to go after a year of living together, and both the MC and Yamato think a lot about what marriage and family are due to the situation they find themselves in. Yamato definitely relies on the MC more, and he knows that; I think this is a big step from the loner attitude he had before meeting her. He’s surprisingly lovey-dovey; while he’ll tease her when they’re together, he’s quick to brag about how lovely his “wife” is when she’s not around (/w\)

The conflict was resolved a bit too abruptly for my taste, but the development of Yamato’s character and his relationship with the MC was done well, and I loved the ending >w< If you loved Yamato in his main story, then you’ll definitely love him in this story as well. Happy playing!