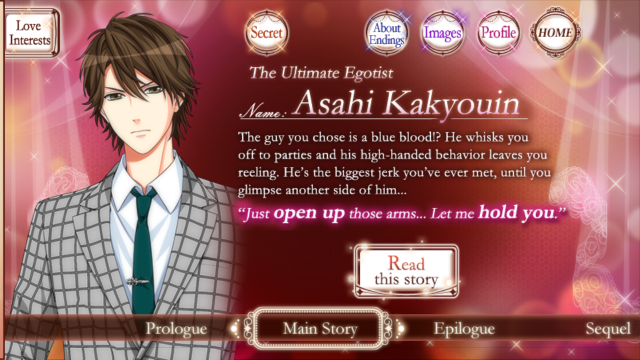 Caught in a contract that states she has to be married within the next year, the MC unwillingly chooses to participate in the Marriage Program with Asahi, her boss from the Lifestyle Products Group. Determined not to be involved in a loveless marriage, the MC feels helpless in her current situation. However, the more time she spends with Asahi in their “newlywed” life, the more her feelings for him change as she sees new sides of him beyond the capable boss at work.

Arrogant and manipulative, Asahi is on the fast-track up the corporate ladder in Sanno Corporation with his position as the top dog at the Lifestyle Products Group despite his young age. While he doesn’t bother accommodating others with his overbearing attitude, he’s quick to put on a smile when it comes to business, and easily manipulates situations to his favor with his acting, even easily telling lies when he needs to. His aggressive business strategies give him a somewhat infamous reputation in the company, but his capability doesn’t come as naturally as he would have people think it does; he’s a hard worker, and puts in a lot of effort to make sure he gets the results that he wants.

I found in interesting that in MFW, the MC has to try and not fall in love, but it’s the opposite situation in MWA7R. Asahi and the MC don’t have the best first impressions of each other, and neither can imagine really falling in love with the other. For Asahi, she’s just a valuable pawn he can use, and the MC is put off by his pushy attitude and mean words. Asahi is genuinely shocked that the MC isn’t accepting his advances since he’s never had a girl reject him before XD However, as they spend more time together and learn more about each other’s past, they both realize that there’s more to the other than they thought, and slowly fall for each other.

While I can see a lot of people potentially not liking the MC (she tends to get flustered over Asahi’s looks a lot), I personally liked her. She doesn’t take Asahi’s words quietly, and fights back. She influences Asahi’s outlook on a lot of things in this route, but most importantly, she changes his view that “money and power are all that matter,” getting a man who’s pride meant everything to realize that those things pale in comparison to staying with the person you love. This is important after you learn about his backstory, and I honestly didn’t think he would be in the situation he was, especially due to his confident demeanor; however, he’s human like everyone else, and has insecurities that he doesn’t show to others because he’s used to being alone. The MC’s inability to leave people who need help alone is what gets him to slowly open up to her, and her actions slowly change even his ruthless way of approaching business, making him more willing to see things from other people’s perspectives.

Asahi isn’t for everyone. If you don’t like oresamas, then I absolutely wouldn’t recommend this route for you. Asahi reminds me a lot of Eisuke and Leon; if you like these characters, then you’ll probably like Asahi as well. While I was screaming “RUDE” at the screen for a good part of the beginning, he (surprisingly) grew on me in the end, and I enjoyed the epilogue a lot. I bought the secret stories since I didn’t get all of them, and I liked them since they were told from his perspective, and you can see the beginnings of him falling for the MC ^w^ Happy playing!