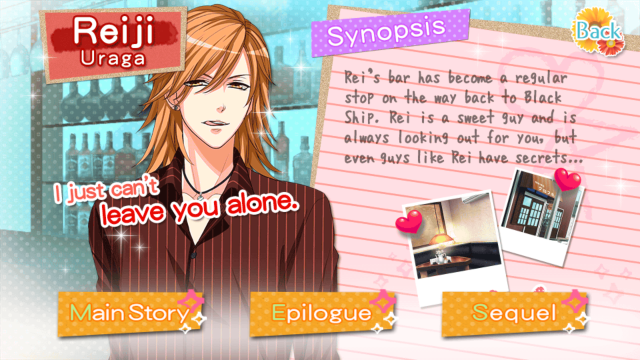 The MC has been spending more time with Rei as she and the rest of the Black Ship gang visit his bar frequently. Due to his outgoing and insightful personality, she’s been asking him for advice and views him as an older sister figure. However, after enrolling in his cooking classes with her friend, she shares a kiss with him?! Though he laughs it off as a joke, she takes it more seriously, and he slowly changes from an older sister to man as she finds out more about him.

At first glance, Reiji reminded me a lot of Keiichi from SND with his feminine way of speaking. It’s easy to dismiss Reiji as another flirty character in the beginning, but as the story progresses you learn that he’s much more complex than expected. While he might seem shallow at first with his appreciation of “beauty”, he’s extremely insightful, though he’ll laugh it off saying that it’s from his experience and age. He has a rather complicated view on love (which I won’t get into because too many spoilers), and shows kindness in a unique way at times, deliberately acting cold and playing the role of the villain out of consideration for other people.

After Koh’s disaster of a main story, I went into this route with a lot of reservations. However, I was pleasantly surprised by the plot and relationship development between Reiji and the MC. Though the plot was a bit shaky in the beginning with the pacing, the rest of the story was written well and developed at a good pace. Reiji and the MC are extremely different people, and I liked how Voltage did a good job of showing their differences, but not to the point where it felt overemphasized. Their interactions initially show their differences, but they slowly grow closer as the route progresses, though there’s a lot of pushing and pulling due to Reiji’s “jokes” on the MC.

There’s a lot of emphasis on what it means to show your “true” self to others in this story, and while I don’t think it was done as well Tsumugu’s main story in OTBS, it was definitely done well. Reiji feels a lot of responsibility since he’s a lot older than the MC (he’s Koh’s uncle, if you didn’t know), and he tends to push the MC away a lot when she gets too close. I really enjoyed watching them slowly grow closer and learning more about Reiji as a character. It definitely made me want more, and I can’t wait for his sequel to be released.

If you like flirty characters with a different side to them, then you’ll definitely enjoy Reiji. I forgot how long 16 chapters felt since the more recent games have at most 13 chapters, and it definitely helped in story development. If you liked his main story, I would also buy the epilogue! Reiji is definitely one of my favorite characters now, and I’m hoping he gets a marriage route in season 3 (though I haven’t seen any CGs for him from the JP apps yet ; w ; *crosses fingers*) Happy playing!