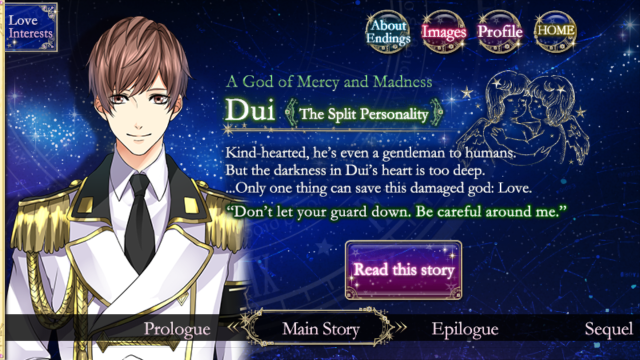 After being saved by Dui, the MC is surprised by how kind and gentle ruler of Gemini is compared to the rest of the other gods. Despite his warnings to stay on her guard around him, she quickly falls for his warm personality and soon her heart starts fluttering at the thought of him. However, there’s truth in his warning when the other gods hint at a dangerous side of him, and while working with him one day, his usual gentle smile changes into a deranged smirk as he threatens to kill her?!

I’m going to state from the start that Dui’s route may be triggering in some scenes, especially at his initial appearance at chapter 5. If you have gone through abuse or have any trauma regarding being choked in some manner, I highly advise you to skip the scene in the reflecting pool room in that chapter. This review will be longer and also contain more spoilers than usual, but I still tried to keep them at a minimum.

Dui is a complex character, but also not so complex at the same time. It’s easier to think of him in terms of two characters in the beginning, but it’s important to realize that both sides of him are still his “true” self, and that both sides have a serious misunderstanding of how the other thinks. It was interesting to see how the two sides of him conflict with each other and how they “merge” together in the end.

Dui is genuinely a kind and gentle person. He has the purity of a child, and can be innocently childish at times. However, his childishness masks a maturity and seriousness that you see when the MC starts to help him with his responsibilities in the Department of Punishments. He takes his job extremely seriously, and I think he has the most developed personal view of humans out of all the gods; he believes that humans make mistakes, but have the strength to pick themselves up and start over again. His punishments reflect that belief as well, since he doesn’t judge the people he punishes based solely on the wrongdoing that they’ve done, but tries to understand their situations and give them just punishments that’ll help them learn that they’re wrong.

While it’s easy to write off Shadow Dui as a conflict that has to be resolved, he’s an important part of Dui’s character and understanding him is a must to fully understand Dui’s character as a whole. He views humans and even his other self as weak, and is cruel and violent to the point that the king of the heavens doesn’t allow him to carry out punishments. I won’t say too much about this side of Dui since he plays a big part on the plot, but there’s much more to him that what meets the eye, and while he comes off as dangerous and unpredictable, he truly wishes the best for Dui and honestly thinks that his actions are benefitting him.

It’s important to note that Dui is not yandere. Yandere characters are characters who love someone to the point that they lose their sanity when it comes to that person and often exhibit extremely possessive and violent behaviors because of love. While Shadow Dui comes off as crazy and violent, he’s not so because he loves the MC, so he is not yandere. Voltage marketed Dui as yandere, but I think it was just so people would be intrigued and buy his route; this isn’t the first time that they’ve mislead people with a description of a character.

The relationship development between the MC and Dui was extremely well written, and I honestly think that this is the best-written route released in SCM so far. The MC’s relationship with Dui is positive from the start, and his charming personality quickly breaks down any reservations she has with him and plays a big part on bringing the two closer early on in the story. The appearance of his shadow self is the main conflict throughout the story, but it doesn’t break their existing relationship; while the MC is a bit scared of Dui’s other self, she makes an effort to understand why he exists and why he does the things he does. She continues to trust in the gentle Dui that she knows, but slowly comes to accept the other Dui and sees the kindness in him that no one else does, even himself.

I loved absolutely loved plot of the story and watching their relationship grow. The main theme of this route seems to accepting everything about another people, even the bad parts that they themselves dislike. It’s easy to show your nice side to someone when you’re trying to befriend them or pursue them romantically, but once your relationship gets deeper it’s harder to hide the “bad” parts of yourself. It’s also important to accept the “bad” parts of yourself as well; not everyone may view them as so, and self-acceptance is important, especially if you want to be in a relationship with someone. The MC’s reluctance to suppress the Shadow side of Dui and her eventual acceptance of him helps Dui learn to accept himself and not be afraid of the darkness that’s in him and realize that it’s not as dark as he thought it was. Just like the humans he admires, he learns to pick himself up and start again, this time hand-in-hand with his “other” self.

This is my absolute favorite route in SCM so far, and I highly recommend it. However, it’s important to note that this route is not for everyone, especially if my warning for triggers applies to you. I can’t wait for Dui’s sequel, and I think it’ll address the mystery behind the situation concerning his sin. I enjoyed both the special story and the epilogue, and learned that Dui’s natural flirting isn’t as innocent as it appears to be in them XD Dui is adorable, and I love both the gentle and Shadow sides of him; he definitely grows a lot as a character in this route. Please don’t be hesitant to give him a try! Happy playing! >w<