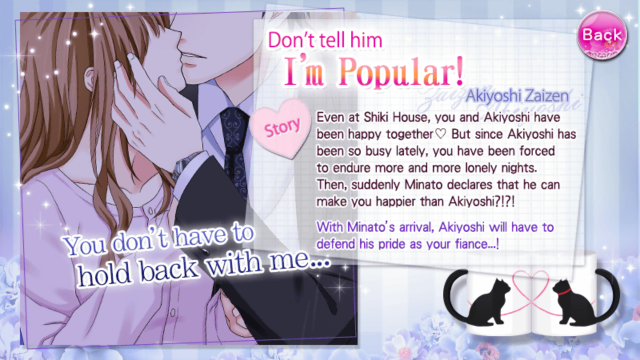 After moving into one of the company’s newly built employee condos, the MC finds herself working on a gossip article with Minato. Keeping her relationship with Akiyoshi a secret while living with a team leads to the couple spending less together, and the MC can’t help but be worried when he starts to look tired at both work and home. However, she faces her own troubles when Minato finds out that she’s in a relationship and confesses his own feelings for her, saying he could make her happier!

As the Chief Editor and the oldest member of the Seasonelle team, Akiyoshi has to be reliable and mature as the leader of his team. However, you get to see these aspects of him from a different perspective as he acts more like an older brother figure to the Seasonelle team when they’re at their condo; you notice this in the previous Don’t tell him! routes as well, but I wanted to mention this because personally I really enjoyed seeing him interacting more naturally with the guys compared to his “Growler” persona at the office (/w\) (though both sides are nice uwu)

Because the “boss” image of him is heavily mentioned in all the routes, it’s easy to forget that the age difference between Akiyoshi and the MC is only three years. He tries to fill in the “leader” role that everyone in the team places him in, but it was nice to see him get a bit possessive when it comes to the MC (/w\) There were a lot of cute moments between the two throughout the story, especially in the beginning.

Akiyoshi feels that he has to be more mature and reliable in the relationship because of his age and position, but at the same time he feels bad because he can’t always do what he wants to for the MC because of the obligations and busy schedule his job requires of him. However, the MC feels like she shouldn’t worry Akiyoshi with her own problems, and tends to hide things from him because she doesn’t want to give him more things to worry about on top of his busy schedule. While the proposal route established the trust they have in each other, this route focuses more on learning to face problems together as a couple instead of trying to figure things out separately out of concern for the other.

There wasn’t as much drama in the love triangle between Akiyoshi, Minato, and the MC compared to the previous Don’t tell him! routes, and quite honestly, I’m glad that there wasn’t. Both Akiyoshi and Minato were mature with how they dealt with it, and there wasn’t any unnecessary fighting. Both of them were straightforward with their feelings, and Minato was especially insightful of how the MC was feeling and actually points out the problems in her relationship with Akiyoshi, but isn’t obnoxious about it or tries to use them for his own means. I found it interesting that I liked Minato more in this route compared to his own =____=;;

I enjoyed this route a lot, despite the fact that there weren’t any big developments in the relationship between Akiyoshi and the MC. I highly recommend this route, especially if you like Akiyoshi; the cute moments between him and the MC are absolutely adorable, and his possessive side shows up a bit more often (/w\) The After the Crisis… story was adorable as well XD Happy playing!