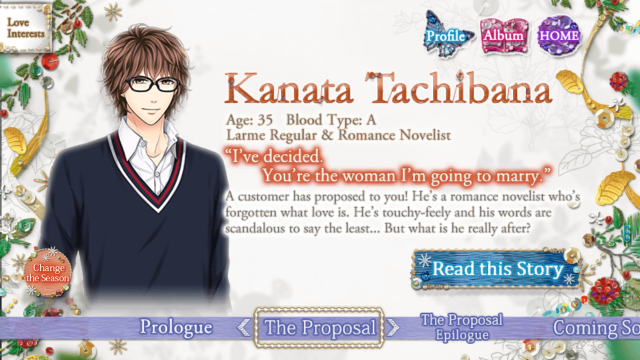 The relationship between Kanata and the MC starts with them using each other; because both of them are bombarded with questions about when they’ll finally settle down, they both see a fake “engagement” as a means of relief from the constant nagging they get from their families. While both of them are convinced that nothing will come from their relationship, you can see that they quickly fall for one another, but the skepticism learned from their past experiences builds a wall between them that makes it difficult for both of them to face their feelings and take a leap of faith to change their relationship.

The change in their relationship from an agreement to something that they both want to continue was done well. You can see them slowly getting more comfortable with one another and the regret that they feel when their fake “engagement” ends. However, they still interact with one another at Larme, and the slow steps they take to getting to know one another out of their own interest instead of for their agreement changes the feel in their relationship. I loved how the MC got to learn more about Kanata through his writing, and the way that he planned on confessing his feelings to her was absolutely adorable and made me tear up a little at the end ; w ; Kanata’s proposal had my eyes watering again at the end, and I loved how it tied in with how their relationship originally started (/w\)

I honestly wasn’t expecting much from this story because of it’s length. I wasn’t convinced that Voltage would be able to introduce a character and develop a deep relationship between him and the MC at the same time within 10 chapters. I was pleasantly surprised by how well written the story was, and while a lot happens in the route, it didn’t feel rushed; the story actually takes place in a long time period due to the multitude of time gaps between the major events.

I absolutely loved this route and definitely recommend it! It’s a story of two people who’ve given up on love, but slowly discover it again through an unexpected encounter that changed their lives more than they originally thought it would. Based on the epilogue, it seems like the next route is going to be a living together one, and I can’t wait to see how much Kanata and the MC’s relationship will continue to grow as they learn even more about each other. Please give this flirtatious writer a shot! He’ll definitely win over your heart with his smooth words >w< Happy playing!