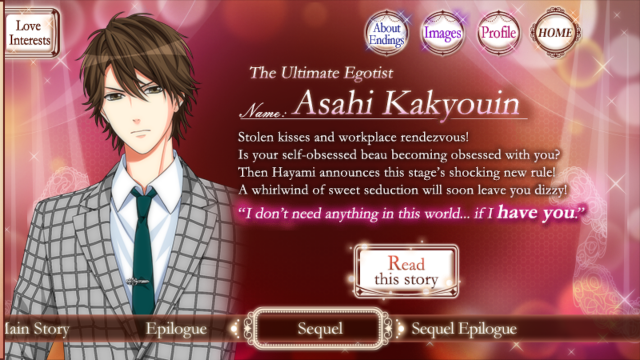 After successfully passing the first stage of the Program together, Asahi and the MC are happily in love. However, their romance is threatened when Asahi’s stepmother voices her extreme disapproval of the MC, deeming her unworthy to enter the Kakyouin household as Asahi’s bride! Asahi reassures her that she’s the only one for him, but the MC can’t help but feel the difference in their backgrounds as she can only helplessly watch as his stepmother plans to separate them.

Asahi’s changed a lot from his main story. While he’s still arrogant and pushy, he seems more approachable, something other characters in the game notice and mention throughout the story (especially the other special executives XD ). He’s softened up and learned to be more understanding and aware of how other people might feel (though he wouldn’t admit if you asked him lol). While he’s an oresama character, there are (a lot of) moments where he acts more like a tsundere XD His demanding tone when speaking to the MC hasn’t changed, but he’s definitely more cute about it (imo), and when he teases the MC, she teases back. I personally saw him a bit like a child who’d pick on a girl he likes because he’s not sure of how to ask for attention and affection nicely XD

The MC faces a lot of inner conflicts in this route. She’s always felt that she and Asahi were from two different worlds due to their difference in social class, but she feels it even more after meeting his stepmother. While she does get a bit dramatic towards the end, it’s understandable due to the stress she’s experienced up to that point; when you’re stressed, you panic, and small mistakes can feel incredibly big. Asahi did a fantastic job at reassuring the MC and doing his best to ensure that she feels like she belongs by his side; however, the broken relationship he has with his stepmother makes it difficult for him to understand why it’s so important to the MC that his family accepts her. A marriage isn’t just between two people; it’s between two families, and Asahi learns this when he sees the MC struggle.

I was surprised by how far Asahi was willing to go to stay with the MC; once again, he throws away his pride to show her and his family how earnest he is about marrying the MC. While the plot did seem like a stereotypical Korean drama, I enjoyed it a lot and I definitely love Asahi a lot more now (this wasn’t supposed to happen ; w ; ). Asahi’s insistence that the MC needs to stay by his side was especially sweet (like this moment) when you compare how he acted towards her in the beginning of his main story, and it’s amazing to see how much he’s changed because of her. One thing I had against the story was how accepting the stepmother was of the MC after finding out that she’s the CEO’s granddaughter, but that was only after she had accepted their relationship so it wasn’t as bad as it could’ve been.

I highly recommend this route, especially if you were unsure of whether or not you liked him after his main story. He’ll definitely tease his way into your heart! I really liked the theme for the secret stories, and I can’t wait to read them for the other characters as well. I also recommend the epilogue; he’s absolutely adorable in the last chapter of it XD Once again, happy playing!