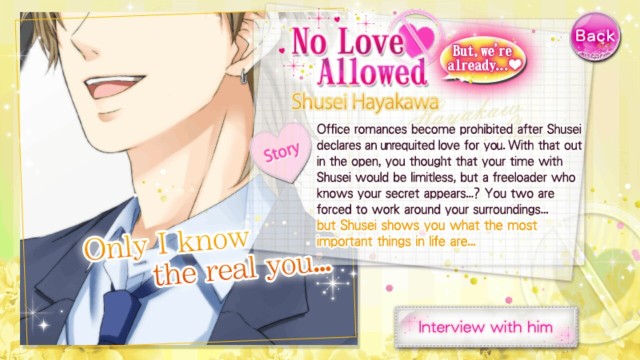 After the MC transfers to Saison, both she and Shusei are shocked when her new boss announces that office romances aren’t allowed under his watch. However, their colleagues equally surprised when Shusei proclaims his “unrequited” love for the MC soon after! Though they’re sweethearts at home, the MC finds herself having to act as the uninterested party at work as Shusei relentlessly pursues her. Things turn even more complicated when it looks like Kagetora finds out about their act?!

The situation in Shusei’s No Love Allowed feels completely different compared to Minato and Kaoru’s because of his plan to act as if he has an unrequited love for the MC so they can spend more time together at work without arousing suspicion. It was a fresh take on the “no office romances allowed” situation, and I liked how Shusei and the MC didn’t have to prove their love wouldn’t get in the way of work to Ayame; this let there be more focus on the MC’s individual growth.

The MC is a hardworking person, and while she does rely on others when she needs to, she feels that she should be able to do things by herself if possible, especially since she’s just transferred into a new department. I loved how Shusei decides to just encourage instead of pushing his help on her. He respects her wishes and holds himself back, even though he wishes she would depend on him more and wants to help her out. The MC definitely grows a lot professionally; her determination and work ethic really shine in this route, and she learns a lot from not only Shusei but Kagetora as well. While she grows individually, she also learns the importance of teamwork and the difference between receiving help and badgering others for it. She doesn’t have to ask for help because the teams at Seasonelle and Saison want to help her out because of how hard she works and the amount of effort she puts into her writing.

There was a surprising amount of Kagetora in this route. He couldn’t care less if the MC and Shusei are in a relationship, but I was surprised by how he was integrated into the story. I loved how he didn’t cause any drama between Shusei and the MC but was more of a mentor(?) figure to the MC; he gives her a lot of advice throughout the story (even though he’ll deny doing so XD ). He didn’t seem to have a large role in the story despite making a lot of appearances, so I suspect Voltage’s aim was to introduce his character a bit more since the focus was more on Ayame in Minato and Kaoru’s routes. He definitely added a lot of humorous situations in the story XD I have to say that I’m very interested in him; I hope he gets a route in the future!

Another thing I’d like to mention is how the jealousy of the women at Shiki Publishing was handled. Shusei is extremely popular at work, and once word gets around that he has feelings for the MC, other women start to make snide comments about her behind her back. However, I’m glad that there wasn’t any stereotypical bullying; the MC just gets more fired to up to do even better having hearing those whispered comments, and I loved how the end she hears them recognizing her skills and saying that she’s someone on par with Shusei and has the right to be with him.

I really enjoyed this route, and I highly recommend it! I absolutely loved the ending; their relationship feels so accepted, and it’s clear that they’re a couple that builds each other. I can’t wait for Shusei’s next route, and can’t help but have high hopes for it! Happy playing!