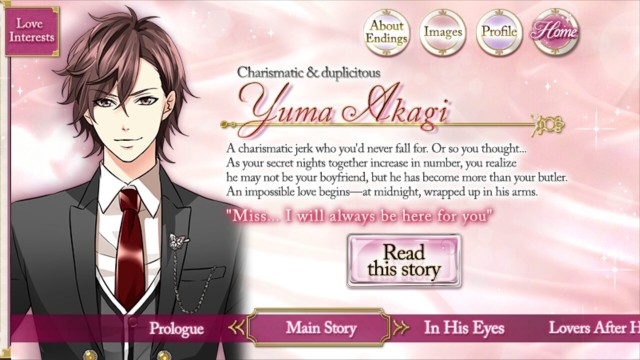 After discovering she’s the daughter of an elite family in the business world, the MC is told to choose a butler to serve her as she’s groomed for her debut into high society. Taken in by his princely demeanor, she chooses Yuma, the Ichijo family’s head butler; however, the MC is shocked when his kind smile is replaced by an overbearing sneer after she does so! His harsh words extinguish any interest she may have had in him, yet she finds herself falling into a forbidden romance between mistress and butler as she learns more about the capable butler.

Known as one of the most capable butlers in high society, Yuma is known for his loyalty and capability; he feels a strong sense of devotion to his master and will carry out anything he’s asked to do, using any means do to so.  While he comes off as prim and proper in front of those he serves, his true personality is (a bit) more egotistical and high-handed. He can be quite manipulative when he wants to be and does a good job of not letting others know of the true intentions behind his actions. Despite the drastic differences between his personalities, the strict standards Yuma holds for himself and others stay the same no matter who he’s dealing with.

The romance between the MC and Yuma has a rocky start; neither side has a favorable impression of each other. I wasn’t a fan of how Voltage got the two of them to spend more time with each other; it felt like a cop out (though reading Yuma’s POV does add more depth to how the situation arose). Quite honestly it felt like Yuma’s feelings for the MC came out of nowhere; the MC’s feelings for Yuma were developed better, but it wasn’t written out amazingly.

I found the plot of the story was better developed than Yuma and the MC’s relationship. Yuma’s past was mentioned and is a big part of the plot in the latter half of the story, but most of it was “told” instead of “shown”. I’m hoping that they’ll touch more on the subject and how it shaped Yuma in a future route (which will most likely be his sequel if past Voltage games are any indication). The forbidden romance aspect was brought up and is the biggest wall between Yuma and the MC; this plot is fairly common and I was expecting it from a few stories in this game, but this story didn’t do anything to make it stand out.

Yuma’s story had a lot of things I was expecting from a butler romance. While this isn’t a bad thing, it wasn’t necessarily a good thing either; I found the story decent, but generic. The route in general felt a bit predictable in a few scenes and a majority of the tropes that were used weren’t made unique to the game. If you want a especially well-written story that reads like something new, I don’t think this story is for you; however, if you’re just looking for a butler romance with a handsome ikemen, then you’ll probably enjoy this story (though Yuma is a bit of an asshat in the beginning =___=). I highly recommend you get Yuma’s POV if you decide to play this story; it adds an extra layer of depth that helps you appreciate it more. Until next time, happy playing!