Hello everyone! It’s been a while since I’ve posted (apologizes for the 18239th time) but here I am, once again to shamelessly write about how much I love fictional characters because who doesn’t enjoy looking at attractive 2D men (but they’re only lines with color in between them did I stutter? N o ).

Back in September I was given the opportunity to attend Tokyo Game Show to enjoy the Utano☆Princesama Shining Live experience behind closed doors (err, door) and interview the staff at the KLab booth about the upcoming release of the global version; for those who haven’t read it yet, you can do so here. KLab was kind enough to invite me once again to their headquarters in Tokyo this month for the Utano☆Princesama Shining Live global version pre-launch party! 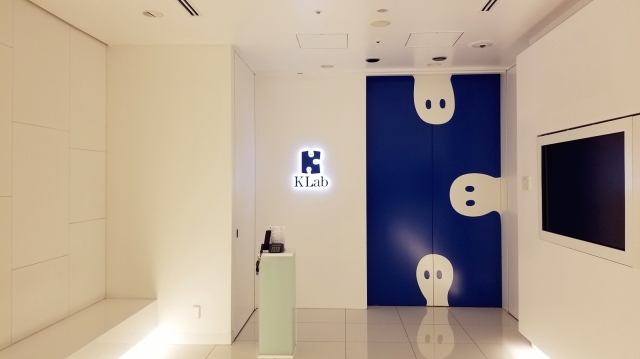 Klab’s reception room; I liked how clean and modern it looked.
They had PVs of KLab games playing on the screens and of course Shining Live was one of them!

I was super excited to attend and was partially baited by the promise of food but mostly by my love for the UtaPri boys (I solemnly swear I love these boys more than food). After introductions from the staff, the party started with a presentation of UtaPri as a series and Shining Live itself. 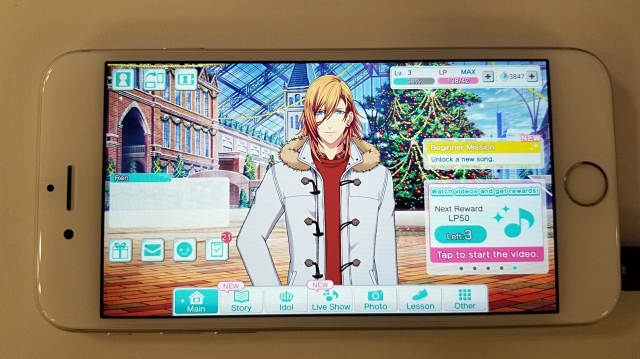 Home screen featuring a belated Christmas date with Ren. I was afraid I’d drop the phone while playing a live lol

The global version of Shining Live will be available in all regions with the exception of Japan and Mainland China on devices running on Android 4.4+ and iOS 9.0+. Text will be supported in English and Traditional Chinese; voices will stay in Japanese with the original voice cast (yay!). We were given devices to play a demo of the global version and after playing the game in Japanese for so long, it felt a little weird to see it in English.

Based on the little bit of story I got to read from the tutorial, it looked like a lot of care was made to ensure the voices of the characters translated over from Japanese to English. I couldn’t help but laugh out loud about how some of it read it English, but KLab truly did do their best in bringing the character speech patterns over. I’ve never played any UtaPri game with English text, which may have been the reason for the slight disconnect; I’ve watched the anime subbed, but anime is fully voiced whereas the main story in Shining Live isn’t, so you have to rely on the text (side stories are fully voiced). 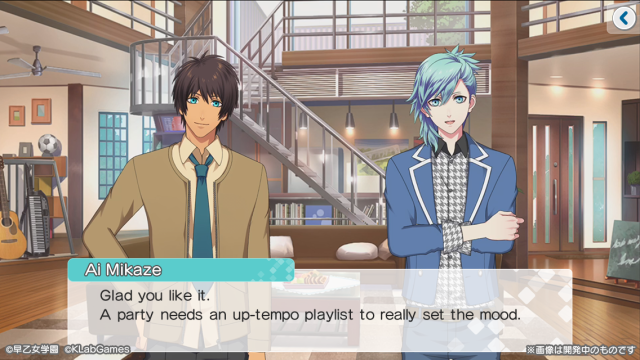 It looked like the UI was left untouched other than translating the text over to Japanese . I’m curious as to how KLab will translate over Photo Shoot titles since they barely fit in the Photo Shoot tabs in Japanese and English uses more letters (lol). The character lines from the home screen are translated on the text box but no text appears in portrait mode so you’ll have to focus on the boys’ lovely voices instead (heart emoji). The biggest difference I noticed in gameplay was that “Just Perfect” was changed to “Perfect” when tapping the notes. The changes are as follows:

I remember when I first played Shining Live in Japanese I wondered why they decided on “Just Perfect” instead of adding “Good,” so I’m glad it got changed for the global version. We were given time to explore the demo, and I had a lot of fun playing lives due to the fact KLab had maxed every available card in the game so far. My heart cries at the thought my live scores will never be as high as they were that night ;A;  KLab also truly enabled me that night by giving 6k+ prisms to roll in the Photo Shoots. I didn’t roll through all of them due to time but it was quite the experience. 6000 Prisms. Never again in my life will I be bestowed such a situation ever again. 6 0 0 0. 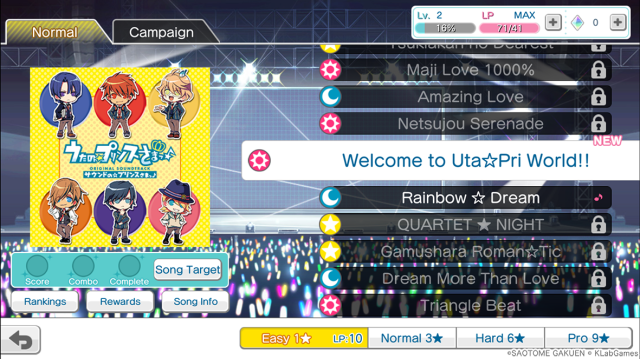 Song list in English; I was surprised they romanized the song titles instead of translating them

My biggest concern after hearing this was if global players would be given the opportunity to get cards released from events and Photo Shoots prior to the global release. KLab assured me they will, but are still working on the specifics on how this will work. Based on this information I would recommend waiting for the global version of Shining Live if you haven’t invested a lot of time in or started playing the Japanese version and don’t understand the language well; it’ll probably be a more enjoyable (and understandable) experience and you’ll be given the opportunity to get all the same cards as the Japanese users.

After the Q&A panel we were allowed some free time in the meeting room! KLab had set up one of the touch panels from TGS set up (hello Tokiya and Ranmaru; Ren already got his turn at TGS) and also had a large touch screen monitor where you could play “Shining Romance” and “Force Live” on. I really enjoyed playing on the monitor; it felt like I was playing Shining Live at the arcade. Getting full combos on the monitor is surprisingly difficult (shakes fist at “Force Live”) and I think I might invest in a touch monitor in the future to play all my rhythm games on.

Utano☆Princesama Shining Live’s official website can be found here. They have an official Facebook page and Twitter account as well. There’s currently a Twitter and Facebook campaign for extra Prisms on release day based on the number of followers they get, so make sure to participate! They’re also holding another campaign where you can win a poster of one of the UtaPri boys; they showed us a poster at the pre-launch party and it’s really big and nice so make sure to participate in that too!! Utano☆Princesama Shining Live global version will be released soon, so make sure to keep your eyes out for it!

Utano☆Princesama Shining Live global version has been released and is now available to download! You can find the download links below.