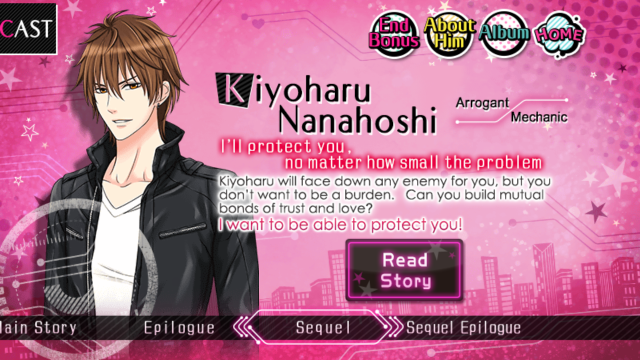 After Kiyoharu asks the MC if she wants to get married, the MC is shocked to find out that they’re both going undercover as an engaged couple to investigate underground auctions being held on a wedding fair cruise. Kiyoharu gets increasingly worried about involving the MC in the case, and doesn’t want her to get in any deeper. The MC doesn’t want to worry him, so she does her best, but things turn complicated when it turns out her ex-boyfriend is also investigating the same case. END_OF_DOCUMENT_TOKEN_TO_BE_REPLACED

*the meter may fluctuate between the two sides, but the result will lead to the respective endings*

END_OF_DOCUMENT_TOKEN_TO_BE_REPLACED 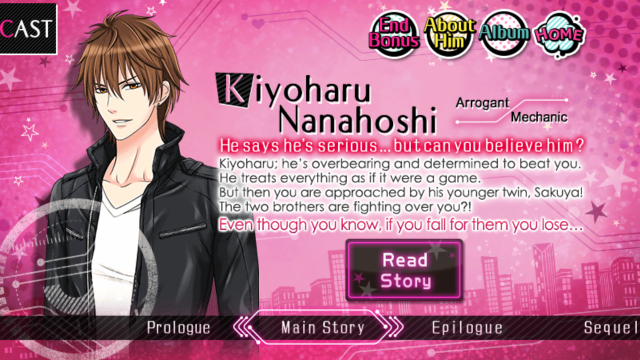 Kiyoharu is older of the Nanahoshi twins. He doesn’t pull back with his words, and isn’t shy when it comes to flirting with the ladies. Although he lied when he first told the MC that he liked her, both he and the MC start falling for each other as they spend more time together. The MC can’t help but wonder if his feelings for her are real, and things turn complicated with Sakuya starts having feelings for her as well. END_OF_DOCUMENT_TOKEN_TO_BE_REPLACED

*the meter may fluctuate between the two sides, but the result will lead to the respective endings*